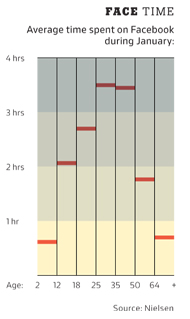 on Facebook : there I am at 16, dressed in an unfortunate cowl-neck sweater, my hair cut to resemble a Semitic cotton ball. William Faulkner, I suspect, would love it — Facebook, after all, is the best evidence yet of the undead past. Ever since I signed up a couple of months ago, I have felt thrust into a perpetual episode of “This Is Your Life” (complete with commercials). “Friends” from nursery school have resurfaced [...]  I have reconnected with the brother of a friend who was killed; rediscovered college chums and colleagues from my early days in New York. I am by turns amused, touched and horrified by these gentle breezes and icy blasts from the past.[...]"

The Way We Live Now - Growing up on Facebook