Above is the symbol of WPD for the next three years.

World Post Day is said to "give governments and Posts an opportunity to demonstrate just how much the ever-expanding range of postal services contributes to national economic growth." The Universal Postal Union's was established in 1874 in Bern -the Swiss capital. It was declared World Post Day by the UPU Congress held in Tokyo (Japan), in 1969.

- Each year World Post Day marks its anniversary on October 9 -

It aims at making people aware of the importance of the role played by the postal sector in people's everyday lives and work. Below you can view a few stamps celebrating World Post Day : from Luxemburgh / Syria / Poland / South Africa. 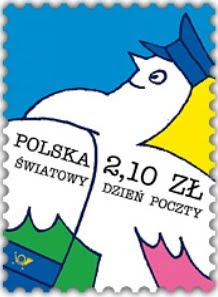