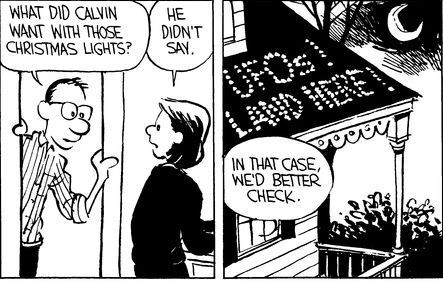 from "Calvin & Hobbes" by Bill Watterson

Parodies are an interesting way of working on traditional and classic literary works : school textbooks in France have now  taken over the English teachers' suggestions and offer paths and plans including animated parodies.

The internet displays loads of documents that parody various tales : "Little Red Riding Hood" is one of the most commonly studied although many others are also worked on.

is part of a late 60s Rocky & Bullwinkle show :

"Invention of Love" was created in 2009/2010 by Andrey Shushkof : it was his diploma animated short film :

He had started his film school in Saint-Petersburg University of Culture and Arts, where he studied directing, photography and scriptwriting. He then "fell in love with animation and started to work as a freelance photographer"

A couple of pencil-outlined birds escape from a little girl´s drawing and lead us through the life she dreams of...

The little girl's dreams are  tinged with romance and unveil an ideal world full with clichés... Still, the short animation is quite nice : a pretty graphism and its quietening music give it a relaxing pace  :-)

Procrastinating in a monotone -a clip

Remember the  >>> a  nimated clip on "procrastination" ?

Compare it with the clip below :

Focus on the video clip voice sound : contrast the author's voice with the voice in the previous clip (September 11)... What is the main difference between the two ways of speaking ? What effect does it have on you ? Do you think the author made it on purpose (why) ? Do you enjoy it ? Why/why not ?

This episode tells Dahlia Brinkley's visit to Springfield Elementary School. Dahlia is the only Springfield Elementary graduate ever to enter an Ivy League college. This gives Lisa an inferiority complex because she is not involved in as many extracurricular activities as Dahlia was ! Therefore when the coach of Bart's Little League baseball team ("the Springfield Isotots")  resigns, Lisa tries to replace him... in order to extend her curriculum.

If your Internet connexion is a bit slow, I suggest you launch the video ("play")

then "pause", until the complete video is buffered (buffering the full video

might take a few minutes)... before you play it !

showing what procrastination is...

watch this alternative video and list what the man does to procrastinate !

procrastination is doodling all around a blank sheet of paper...